When, in 2006, well-known local researcher and historian Leon Barron, passed away he left a large archival collection containing photographs, original research, oral histories,and newspaper scrapbooks pertaining to the shipbuilding and railway eras of Kings County. This large collection was left to the Kings Historical Society for the archives of the Kings County Museum, Kentville, Nova Scotia.

Funding was obtained from various sources to hire an archivist from Acadia University to work on cataloguing the materials and digitizing them. The intent is to provide a searchable database of the collection with digital copies of the material available on the museum’s computer system.

By September 2011 approximately 60% of the collection has been digitized. A committee of museum volunteers has been formed to complete this massive project.

This web page will provide frequent updates of progress being made and we will also provide examples of the types of material available in the archive. In due course we may be able to make available an on-line index to the collection. 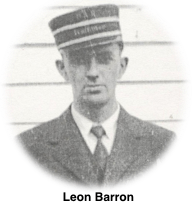 Leon Barron was born in 1932 in Kingsport, Nova Scotia. In 1953, after completing his education at local schools in Medford, Canning and Mack Business College, Kentville NS., he started his truck driving career with Kent Foods Ltd. He then joined the Dominion Atlantic Railway and worked as a trainman during the last five years of steam locomotive service in the Annapolis Valley. With the introduction of diesel trains his job was eliminated and he went back to truck driving.

Those were his day jobs but his real passion was local history with particular emphasis on the “Golden Age of Sail” and the Dominion Atlantic Railway. Over the course of his life he amassed a large collection of documents, maps, memorabilia and artifacts which he bequeathed to the Kings County Museum.

He was a remarkable man whose spirit was captured in the following obituary written by Bria Stokesbury, Curator of the Kings County Museum.

“Ed Coleman, in one of his columns, once referred to Leon Barron as Kings County’s “Mr. Know-it-All”. I’d like to add another title “Mr. Do-it-All”.Following his retirement in 1997 Leon who was already a charter member of the Kings Historical Society became much more involved with the Museum. For many years, in fact right up until his death, he had been an active member of the Facilities Department. If anything on site had to be fixed, moved, mowed, cleaned, transported – whatever – Leon would be the first to help and the last to leave. Arriving for work sessions in his trademark blue shirt and pants Leon began and ended every visit with a story or update on his latest research.

Kings County’s “Mr. Know-it-All” did in fact know just about everything one could know about the “Golden Age of Sail” and the glory days of the railway. With his passion for collecting – photographs, historical facts, and any information on shipping and the railway – Leon was one of the foremost local historians on these topics. He was a walking encyclopaedia whose fantastic memory made him an invaluable resource for this organization.

Leon was generous with other societies as well. He was an active member of the Fieldwood Heritage Society and Wilf Carter Room, and the West Nova Scotia Regiment Memory Club.

Leon’s time spent working on behalf of this society might not have been so freely available without the consent of his wife; another wonderful volunteer with the museum, Mary Baron. Was there ever so patient and good-natured a first mate as Mary?

We share in her loss of this man who was so many things – historian, researcher, strong-man, energetic volunteer, and friend.”

“For me, my craft is sailing on,
Through mist to-day, clear seas anon.
Whate’er the final harbor be
T’is good to sail upon the sea.”

NOTICE: All images used on this website are the property of the Kings County Museum and may not be copied or reproduced in any manner whatsoever without first obtaining permission in writing from the Museum.